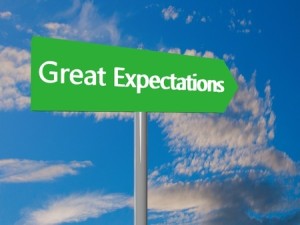 Expectations are a really interesting thing. In a sense, they can be really unhelpful: when we expect something to happen and it doesn’t, we may become angry and resentful of it.

At the same time, there’s another way of seeing expectations that’s more about cultivating openness and trust. It’s certainly true that what we expect to happen affects what we see. In fact, this has been shown scientifically.

Each individual is presented with an overwhelming amount of information every day. I’m not just talking about information like news media and advertising, but even simply walking down a street in the middle of the day could be an all-consuming event if we gave our attention to everything that was going on.

There are so many things that can get our attention that it’s absolutely impossible for us to process all of them, so our mind picks out the things that seem the most relevant.

Have you ever bought a new car and suddenly it seems like everyone around you has that same car? It feels like they’re everywhere! It’s not that everyone went out and bought the same car that you did, it’s just that now it’s in your awareness.

They end up with two very different experiences of life.

Knowing this, we can consciously create expectations that will empower us and the people in our lives by having openness to the expectations without being attached to them.

Often, we believe we are open to good things happening, when we’re really not as open as we think.

Let’s say you’re preparing to have a call with a potential client. Of course you think you’re open to that call going well. Who doesn’t want more clients?

But often we have a lot of background static going on in the form of thoughts like, “This person isn’t going to like me or what I do. She’s going to think my prices are too high. If I get this new client, I’ll have to do so much work and I don’t have the systems in place to bring her in…”

When those thoughts are running underneath everything else, we’re not as open as we think we are to getting this new client. That will come through in how we talk to the person, how we present ourselves, the questions we ask and even the tone of voice we use.

The more static, the less clear the communication and the less likely we are to get the client. Clearing out the background static is the fastest way to create empowering expectations.

You’ll See What You Want to See

Someone recently told me a story that outlines the nature of expectations wonderfully:

There was an old man sitting on his front porch. A car drove up, and the people in the car said, “Hello! We’re thinking of moving here. Can you tell us about the people who live in the town? What are they like?”

The old man replied, “Well, what were the people like where you’re from?”

“Oh, they were mean and gossipy and awful,” the driver said, “we hate living there.”

“Yup,” the old man replied, “That’s pretty much how they are here.”

The car drove off and a little while later another car pulled up, asking the same question. The old man asks them, “Well, how are the people where you’re from?”

“Oh, they are wonderful! They’ll go out of their way to help you. They are so friendly and warm!” The people replied.

“Yup,” the old man said, “That’s pretty much how they are here.”

If you’re ready to clear out the background static and cultivate empowering expectations for yourself, let’s talk. Click HERE to set up a time to talk to me today. In this complimentary call, we’ll identify some of the primary issues causing your static and what you want instead.