We are bountiful, abundant, energetic human beings. But doesn’t it sometimes feel like you’re exhausted before you even get out of bed?

Your energy gets tied up in things other than physical activity.

Let’s say you wake up with 100 units of energy. Where do they all go? 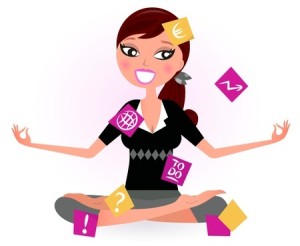 Some of them are tied up managing the past. When something traumatic happens to you, even if it was a long time ago, it’s as though part of your present self is trying to push the memory away like it never happened.

So you have energy tied up in that; it takes effort to hide feelings from yourself by pushing them down or away. Let’s say that takes 20 units to manage.

Another part of you goes through life as though the event is still happening. For instance, one of my clients had a traumatic experience as a child. She saw something happen to a beloved animal that was caused by somebody she knew.

Part of her was expending significant energy pushing that memory away, trying not to think about it, not telling people about it. Another part of her had the thought, “I can’t trust anyone.” So she was living as though that event could happen or might happen at any moment.

There’s another 15 units tied up in keeping thoughts like that away.

This happens a lot with events that happened in childhood, because in many ways you’re more dependent on other people. You don’t have as much autonomy and personal power as you do when you’re an adult.

Another 10-15 units go to things like the argument you had with your partner that is still unsettled. Then there are the bills that must be paid today… plus there’s all that stuff you grew up with around money and the times you’ve bounced a check that tie up energy.

And then you have 30 units of energy invested in the future, the things that you’re worried about, the “what-ifs.”

“Sure, things are going well now, but what if all the sudden I don’t have any more clients? Or what if this person that I’ve hired to do this job doesn’t work out and I lose all that money?”

And that’s not even getting to the part about enjoying yourself.

Free Up The Energy

When you free up those other units of energy, you have so much more at your disposal. Often, you have no idea how much you’ve already given away until you get it back.

When you dissolve your fears, it’s like you pull the plug. Your energy is no longer flowing down that cord and it stays with you here in the present.

Sometimes after a session my clients feel tired. It’s the feeling of having carried something really heavy and finally putting it down. They’re exhausted because they don’t have the adrenaline of actually doing the carrying at every moment.

Sometimes they feel so light and so energized because all of the sudden they have access to energy that they didn’t have at the beginning of the session. They’ve put down the weight of whatever they were carrying.

This week, let’s talk about where you might have energy invested. Wouldn’t it be great if there were a pie chart of where all your energy went?

If you’d like to talk about what’s going on for you and how I might be able to help you free up some of you energy, let’s chat. Click HERE to set up a time.