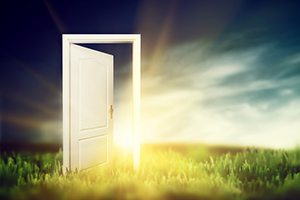 One of our habits as human beings is to fight change as much as we can. When things start to look different than we expect – when our certainty in the world is shaken – we start to panic… despite the fact that on some level, we know change is inevitable.

I think the biggest reason we fight change is that a good portion of our brain is reptilian: it’s all about survival.

Survival typically means playing it safe and sticking with what you know. And for many, many generations, that has worked for us… but now our world is changing so fast. The rate of change has increased exponentially in our society.

As a global community we’re moving beyond playing it safe and beyond our reptilian brain – and in fact, the world economy depends on us being able to think quickly and not be stopped by fear.

And although we’re shifting and changing at an astonishing rate, we can’t simply cut out the reptilian portion of our brain. We need it to survive! This is the part of our brain that controls our breathing and our heartbeat… but we can’t let it limit our way of being in the world anymore.

I recently listened to one of Brené Brown’s talks and she said something that meant a lot to me. Brené said that, “the opposite of faith is not doubt, but certainty.”

When we become certain, we turn into a rock. We’re certain that things are a particular way and there is no changing our minds. We’re not open to change, we’re not open to mystery or something new.

We love to believe in certainty because it helps us feel like we know what we’re doing, what’s going on and that we’re safe and in control.

The problem is that certainty and control are simply an illusion.

We need to have faith in something, whether it’s in a divine being (God, Source, the Universe, or whatever you call it), in our own ability to stay afloat, or simply faith that things work out and that we’ll be okay. Until we get comfortable with our faith, we’ll close off all other possibilities and cling to certainty like a lifeline.

Tweet: When we have faith in something bigger, we create a path toward wonder and new life.

Try This Puzzle to Exercise Your Certainty

Sometimes, we have to think outside of things we would usually expect or feel certain about in order to truly experience the wonder and awe we were born to feel.

As a fun experiment, try this puzzle to test your willingness to step away from certainty and find a new reality: your task is to connect all 9 of the dots. You must use only four straight lines that are drawn without lifting up the pen or pencil, each line starting where the previous line ended. 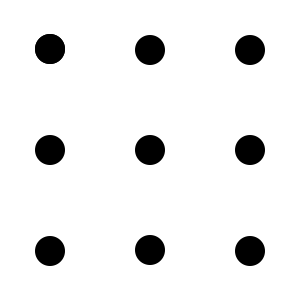 Did you find a solution?

I would love to hear your thoughts on certainty or the dot puzzle. Share a comment below about how the idea of certainty applies to your life – and what you can do today to release it and step into a state of wonder.