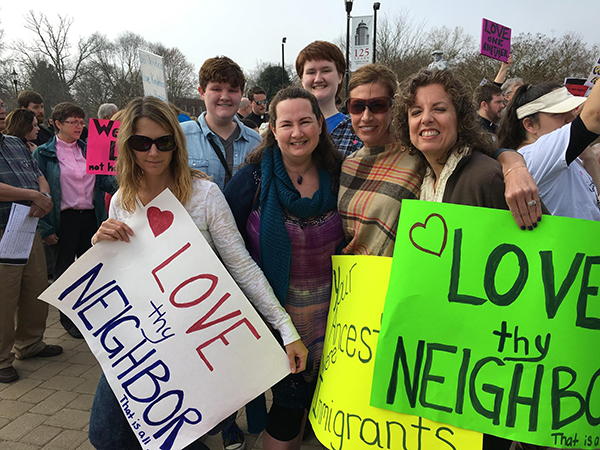 I’ve become increasingly concerned about the violence (including verbal violence) being reported from Trump rallies. The fact that many of the incidents seem to have a strong racial or ethnic component is especially troubling to me.

My family and friends are a beautiful array of people from different backgrounds, countries, ethnicities and beliefs. My values don’t let me stand by when some of them are being targeted or bullied.

So when I found out that some friends were going to attend a local rally in the name of peace, I was eager to go with them.

I’ve worked for a long time to cultivate my inner peace and strength – a path that hasn’t always felt peaceful or strong. To be honest, I wanted to see how I would do in that situation. I wondered if I would be able to maintain my own peace or if I would get swept up in what was going on around me.

Also, after all the reports I’d seen going around, I also wanted to see for myself what was happening and hear what was being said.

As I sat in my car in the parking lot before the rally, I centered myself and made the commitment to see each person as a person, not a label. Not “a Trump supporter” or “a Trump protester” or whatever, but a person worthy of respect.

The intensity of the anger, fear and hurt was more than I’d expected. And it wasn’t all on the side of the Trump supporters.

Things were quiet enough when I got there and for the first hour or so we were in line. Then, as the time ticked on, the tension increased.

The rumblings got louder and more frequent. There was more of a sense of “us” and “them”.

Supporters were saying that the college students needed to stop being lazy and get a job. Protesters voiced outrage at comments about Mexicans and other immigrants.

The energy it took for me to stay centered AND present was huge. At times I felt like a small drop in a big, tumultuous ocean. I was exhausted by the time I left 4.5 hours later.

The line to get in the auditorium was incredibly long and they closed the doors when we were about 60 people away. I went and stood with the protesters, feeling both disappointed and relieved. 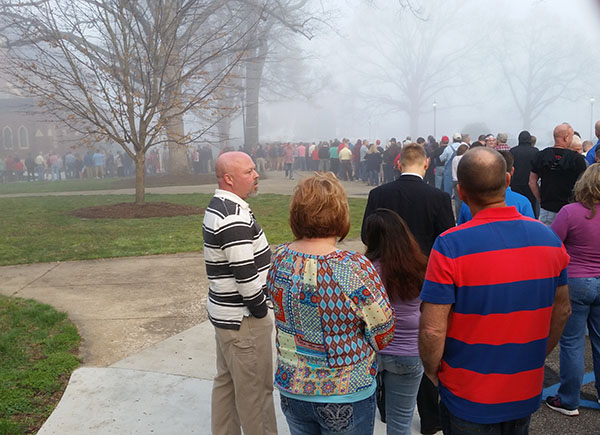 What I took away from the experience was this:

To move ahead, we need to not see each other as the enemy.

What does all this have to do with you and your business? A lot.

It’s worth taking the temperature of your business. Do you operate out of fear or hope? What’s the underlying energy in you and your marketing?

Does taking a stand for what you believe, for your business and the results you give scare you?

When you run your business from a place of strength, courage and commitment, clients are drawn to you, people trust you and you’re more effective in your work. And life is more fun and exciting.