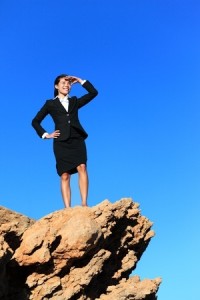 During a recent session, one of my clients described how she leads her team and I noticed that she was actually talking about taking charge, which is not the same thing.

Taking charge is about taking on tasks, micromanaging and making sure everyone is doing exactly what they should be doing. When you’re taking charge, you’re focused on other people. Your energy is outward.

When you’re leading, your energy is centered in your body. The experience is much more about letting go of things than about taking things on.

Leadership expert Warren Bennis once said, “Becoming a leader is synonymous with becoming yourself. It’s precisely that simple and also that difficult.”

Being a leader means focusing on yourself. And I’m not talking about the kind of self-focus that makes you think, “Oh, I have so much work to do and everyone wants something from me!” That’s about playing the victim.

The kind of focus I’m talking about is the kind that allows you to ask yourself questions like, “What has to happen so I can take care of my own needs? Where am I out of congruence with how I’m running my business? What do I need from my team and how can I effectively communicate those needs? What do they need from me in order to do their job?”

It All Comes Back to Self-Awareness

As I mentioned in my last post, The Difference Between Fear and Intuition, developing self-awareness helps us tap into and understand our feelings.

Sometimes, we work against our feelings and try to push down what’s naturally coming up for us. This can happen on such a deep level that we’re not even conscious we’re doing it.

Think about yourself like a pool of hot lava with a giant air bubble rising to the surface. The bubble comes up and expands until it can’t get any bigger and then it bursts, releasing the air (feeling) that was inside. The lava then sinks back into the space left by the bubble.

The same thing happens inside of us. When we allow our feelings to come up and accept them, they will generally resolve themselves. The inner space they were taking up is now available for us to occupy. This leaves us with a feeling of spaciousness and freedom.

Ignoring feelings doesn’t make them go away. Instead, it just keeps them trapped inside us. And we feel crowded and pressured, not even realizing it’s coming from inside us.

Sometimes we need help dealing with the really big or deeply rooted feelings… but often, resolving them is as simple as sitting quietly for a couple of minutes and allowing them come up.

For my client, unacknowledged fears were causing her leadership problems. She was scared of losing control, she was scared of things not happening as she’d planned and there was a lot of fear surrounding issues of trust.

It wasn’t even a matter of her trusting the team as much as it was being able to trust herself. To trust that it was OK to sit back and focus on what she needed to do rather than taking on everything she was worried her team wasn’t doing.

With her new inner space, she was able to see systems that could be created to ensure the work was being done and to alert her with something did need her attention.

Sometimes we avoid self-awareness by keeping ourselves busy. Sometimes, we put our focus on others so we don’t have to look at ourselves.

Once my client allowed her fear to bubble up, she could be open to new possibilities and her whole energy changed.

At the start of our session, she talked about her tight muscles and how tired she was. By the end of the session, she told me that her shoulders had relaxed and she was feeling excited about getting back to work with her team.

Take two minutes to sit quietly and connect with what’s going on inside you. What do you notice? Leave a comment below.