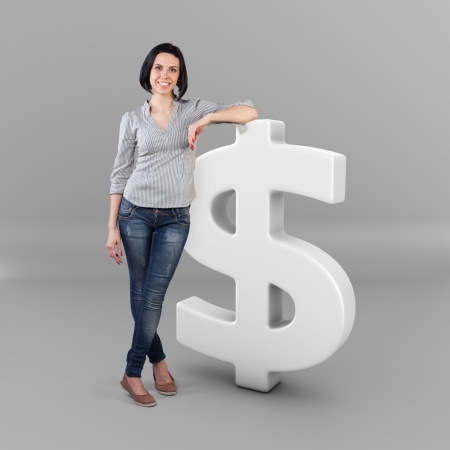 Money is such a big topic for people. For many of us we use money to measure self worth. The people I’ve seen who don’t feel worthy of money are always the ones grabbing after it. They’re always looking for ways to get what they need without having to do the work.

They ask a friend who’s already bought that computer program to give them their passkey. They look to ride on other people’s coattails or they buy into what I call the Oprah Mentality. They think, “As soon as I get on Oprah, then my business will take off.”

For many people, getting on Oprah is the business version of the knight in shining armor!

You can spend time waiting for someone else to rescue you or you can develop that embodied sense of self worth that will allow you to rescue yourself.

Money Won’t Come Until You Believe You Deserve It

I had a client several weeks ago who described herself as feeling tense, fearful and stuck. She was also overwhelmed by money worries.

We spent our session doing a clearing on all of those issues and focused on getting her to a place where she could truly allow, accept and embrace money.

I saw her recently, about three weeks after our session, and she told me that money and clients had been flowing in ever since. This happened because she took the time to develop her sense of worthiness.

Developing The Belief That You’re Worth It

In order to get to a place where you truly feel deserving of money, start by recognizing that your expertise is valid and valuable.

If you don’t believe that you have anything valuable to contribute, then you won’t spend time allowing yourself to be creative. You’ll end up just running after others, trying to figure out who has the right answer and then just copying their ideas.

That kind of behavior always has the energy of desperation to it.

Desperate energy is just no good. It will never attract anything positive and most people can’t stand being around it. It makes us uncomfortable.

The Business Landscape is Changing

The Internet has made it possible to find hundreds of different people offering the same services. It is more important than ever to be authentic and congruent with our energies.

People will be attracted to your business not just because of what you’re offering but because of your authenticity and the care that you appear to give yourself.

You might be thinking, “Oh, I always treat other people better than I treat myself,” but that kind of behavior is out of balance and unsustainable.

Eventually that well will run dry and unless you’re a true saint, acting from a place of pure intent, then there’s going to be resentment.

If you’re talking harshly about yourself, on some level you’re doing that with other people too.

Can you imagine Oprah talking dismissively about her accomplishments? It would never happen. Oprah doesn’t value herself because she’s Oprah; she’s Oprah because she’s always valued herself.

No matter what business you’re in, if you’re standing in your power then you’re calling the people around you to do the same. You’re calling them to stand tall. You can’t do that if you feel like you’re below them.

You can’t believe that you’re less than everyone else and still charge for your services.

An important piece to standing in your power is taking quiet connection time with yourself every day.

What are some things that you truly value about yourself both as a person and a business owner?