If something doesn’t feel or seem possible for us, we don’t go for it.

We often see other people’s big accomplishments and we think, “Wow, that’s so cool, I wish that could happen for me.” We forget (or we don’t even know about) all the steps it took for that person to get there. We simply see the arrival point, and it feels so big that we don’t believe something similar would be possible for ourselves. 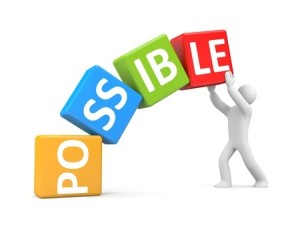 Here’s something to consider: at first, even if you don’t believe 100% that something can happen for you, you have to at least believe that it’s possible.

For one thing, your whole energy and demeanor is different when you believe that something can actually happen. Imagine that you’re talking to a possible client and you think, “There’s no way this person will want to work with me. My prices are too high. Who am I to do this? This sort of thing doesn’t happen for me.”

In your conversation with this person, that is the underlying message. You may not be saying those exact words, but you’re talking in a flat tone and you’re not truly communicating the value of your offering.

On the other hand, when you think that it’s truly possible to work with this person (when you believe that they may have the money and they’ll see the value you offer), you operate in a completely different way.

In a sense, this is what people mean when they talk about “self-fulfilling prophecies.” Our belief about a situation or person turns it into a reality.

So, when you really believe in what you’re doing, you’ve released fears, you’ve let go of the old story, you’ve let go of anything in the way of really standing in your power and your truth. It doesn’t mean that 100% of your prospective clients will sign up with you, but it does mean that a whole lot more will.

It also means that you’ll continue doing what it takes to hone your message and refine your presentation, which will continue to create a positive difference in your business.

I recently worked with a client who wanted to focus on standing in her values. She had just given a proposal to a prospective client of her own, and fear and doubt bubbled up as she waited for the person’s response.

She had trouble really feeling like it was okay to charge money for her spiritual work. Even though she knew it was okay intellectually, it just wasn’t resonating in her heart – no matter how much she tried to convince herself.

Plus, the proposal she’d sent included some of the highest prices she had ever quoted anyone. Needless to say, she was feeling pretty nervous about it.

We did a session together focusing on accepting her value, being spiritual AND making money, and finding the resonance. The next day, the prospective client let her know that she wanted to sign up for the package.

Do you ever have trouble believing in the possibilities you want to create? Share a note in the comments below about your experience.