Sometimes we have so much “gunk” in our space that it’s really difficult to see all the gifts around us. We lose sight of the great truth that we can create whatever we want and are stopped by unhelpful thoughts, uncomfortable feelings and fears.

When you have those things in the way, it’s a huge challenge to see the opportunities that are around you all the time. I help clients clear that stuff out, so they can operate from a place of love and clarity.

You Can Be Relaxed AND Productive

I worked with someone recently who has a successful business that she runs with a partner. In the last year, they’ve redefined their roles in the company and grown quite a bit.

Despite this great expansion, my client felt so frustrated. To her, everything felt hard. She didn’t feel like she could keep on with the business and she even thought she might be ready to chuck the whole thing. 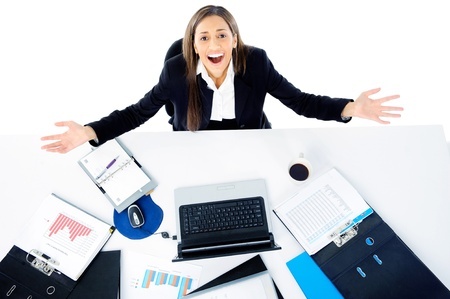 Through our work together, she realized that she had an expectation that she had to do things the way she always had, even though it didn’t fit in with the new business model. In the past, she had worked a corporate job where she was extremely efficient, organized and decisive. Now, her business partner is the exact opposite and it was driving her crazy.

This client felt like the responsibility of the whole business rested on her shoulders. If it failed, she believed it would be 100% her fault because she was having such trouble getting things done.

What she realized through our work together was that she had forgotten how tight and controlled she’d been in her previous job. Sure, she had been productive, but she had also been extremely uptight.

Once we released her thoughts around all of this, she realized that she had been using guilt as a motivator for herself and that if she let that go, she could step into a new realm of possibility. She became open to the idea that she could be both relaxed and productive, and the idea that there was a way to resolve the situation that would work for everyone involved.

It Doesn’t Have To Be That Way

The whole process of starting a company and being an entrepreneur can feel so scary and daunting. It can be lonely.

The truth is, it doesn’t have to be that way. When you release things like restrictive thoughts and beliefs, the real gift is that not only are you clearing a path to move forward confidently, you’re also releasing things that have been stored in your body since you were a child! Little 8-year-old you had the same types of feelings and thoughts that you do today, not feeling good about yourself or academics or friends, or feeling left out.

You don’t have to drag up those old things every time a similar situation comes up in your adult life. Once you release them, you create space for a new experience. Then you’ll be able to resonate with whatever your next step is. You’ll be clear enough to see it right in front of your face.

What is it like for you when you’re stopped by thoughts and feelings that don’t serve you? Have you ever been able to recognize them and choose a different path? Leave a comment in the area below to join the conversation.