Two monks were walking down the street together. It had just rained, and the dusty street had turned into deep, sticky mud. Before too long, they come across a beautiful woman wearing her best clothing. She needed to get from one side of the street to the other, but the mud was so deep that it would ruin her clothes.

One of the monks saw this, and after asking her permission, picked her up and carried her across the muddy street. He set her down, and the two monks went on their way.

The second monk was silent for a long while. Finally, he burst out in anger, saying, “How could you do that? It is against our belief to touch a woman!” He went on and on in fury until he finally fell silent. The first monk turned to him and said, “I put her down miles ago. Why are you still carrying her?”

When we have a sticky spot – an unresolved past experience or past hurt that continues to shape our limiting beliefs about ourselves – we pick things up and carry them for our whole lives. It’s almost as if we’re gathering evidence to support our belief that life isn’t fair or we’re not getting what we need.

This makes life much more difficult than it needs to be.

Where Are Your Sticky Spots?

I recently worked with a client who told me that she found out that someone was talking negatively about her business. She realized that, on some level, the person was reflecting back her own doubt about her work.

Energetically, she had given this person permission to talk this way because she hadn’t been standing in her full value and power.

The other person h 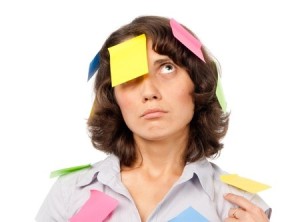 Even though she initially felt angry with this other person, my client chose to see the situation as a gift. Together, we worked through her stuff about doubting herself and feeling like a fraud.

Some of it was from childhood, some more recent. We didn’t even know where some of it came from, and it didn’t matter.

What came naturally – easily – to her after we worked together was the sense that she’s enough. She felt that she truly has a right to be herself, and to be recognized for her work.

Wear Away the Sticky Spot

Once it’s cleared energetically from the past, things don’t adhere to you anymore. You’re no longer looking to change that old point of view, because it already has changed, naturally.

I love hearing stories from my clients about how much easier things are for them in their business. Things that used to feel difficult simply aren’t that big of a deal anymore.

One client told me that she wrote an email after a session we did together and sent it out, no big deal. She was about to get up and do something else when she realized, “Oh my gosh, I just simply did that! That is something I would have struggled with before, and agonized over.”

She just did it and got to move on – almost without even realizing what a difference it was.

Do you notice where you’re making life harder for yourself than it needs to be? Name one way you see this occurring in your life in the comments area below.