Last week, I talked a lot about what happens when we push down our fearful thoughts and try to force ourselves to feel “fine” (read more HERE). Piling new, reactionary thoughts like, “I’m fine. I can do this. People respect me” on top of fear-based thoughts only works to reinforce the fears.

This phenomenon applies especially in the area of money and finances. If there is something really bothering you, then it is important to acknowledge that, look at it and see what’s going on underneath the surface.

When you ignore or repress the “not fine” feelings, it’s like having a splinter just below the surface of your skin that continues to irritate. Then, when something little happens, you have a bigger reaction than is called for. You’re not just reacting to the event, you’re also reacting to the other thing that was never resolved.

You may even find yourself being surprised at the intensity of your reaction.

Money is a Trigger for Many People 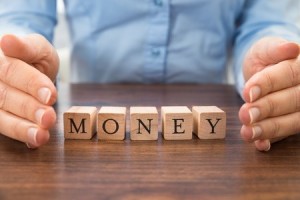 All this can come up particularly strongly around money. To make it more concrete, here is an example:

If you have a disagreement or misunderstanding with a client about money and it never gets resolved, it’s like the splinter under the skin. You may think that the relationship is fine even though things weren’t settled to your satisfaction. Later, when the client calls you and wants some extra help with something, you find yourself becoming especially irritated.

It’s not just the request for help that you’re reacting to. It’s the irritation about the money issue.

It can be hard to see it when we’re in the middle of one of these situations. We just feel like, “She is so wrong. She should never have asked for that, it’s so rude.” But when we get clarity on it and realize that it’s really not about the request (because you can always say “no” to a request or have a conversation about it), we can see that it’s really the feeling of being cheated or unappreciated in the previous money situation that remains unresolved.

When you view a relationship with a client through the lens of, “She’s going to try to cheat me and she won’t respect me,” anything she says or does can quickly be attributed to that motivation. This sets you up for a certain type of reaction.

Money Brings Up Feelings of Worth

Money is a topic that will often bring up questions of worth, appreciation and respect, especially because money is an easy thing to use as an indicator for the non-tangibles. It’s easy to look at a number on the page and understand value; it’s harder to evaluate appreciation and the sense of being valued.

If someone says, “I really value the work you do, and I’m going to pay you half of what you’re asking me,” which are you going to feel is more truthful? Numbers are more tangible, and we tend to believe the more tangible. Shifting our perception of value away from just a number on the page comes down to getting clear in yourself.

We are complicated people. Just like an unresolved money issue with a client, any unresolved issues we hold within ourselves are brought out later when something happens that feels similar. A time in the past when we felt unappreciated, for instance, can dramatically color our perception of the present. The situation begins to snowball from there.

My work with clients specifically focuses on clearing out old gunk that we’re still holding on to from past experiences. If you would like to take the first steps toward clearing out the past so you can step into a brighter future, click HERE for my complimentary PDF tool, The Power Shift Starter Kit, where you’ll learn steps you can take right away to create space in your life.